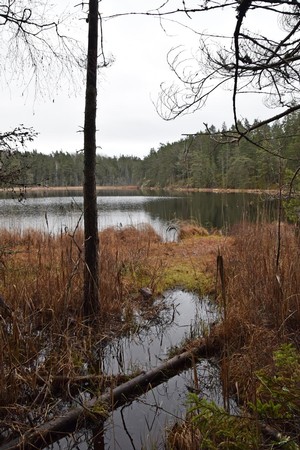 The Amazon is being cut down unchecked and Australia is burning, thereby destroying the trees that are the habitats for numerous, partly acutely threatened animal species. On social networks, nature lovers join environmentalists and firefighters in a feverish frenzy and rejoice over every animal rescued from the flames. But in Europe too, the prospects for the survival of many plant and animal species are bleak. Sweden's last untouched old-growth forests are shrinking rapidly. It’s not only the effects of climate change that are affecting nature, but also industrial use.

No other region in Europe has such vast, contiguous forest areas as Scandinavia. After Finland, Sweden is one of the most densely forested regions in Europe. What makes these forests so special in comparison to other countries is that they are not commercial forests planted by man, but real old-growth forests. Some of their trees are more than 350 years old (as in Tyresta National Park on the outskirts of Stockholm). Many of the old jungle giants are felled to fire local heating power plants. The exploitation does not even stop at dead wood, which is important for many animals. Despite being unsuitable as sawn wood, dead wood can still be used as biofuel.

Nature conservation programmes do exist, but they do not go far enough to ensure effective conservation of the old-growth forests. Less than 4% of the remaining 5% of intact forests in Sweden are designated as nature reserves and biotope protection areas. Although the government wanted to put 900,000 hectares under protection by 2010, this goal has still not been achieved. On the contrary, state-owned forestry companies continue to remove FSC key habitats, which are important for local flora and fauna, from the internal register and approve them for clearing.

One of the largest buyers of Swedish forest products is Germany. Around 20% of the paper products sold in Germany come from Swedish forests. The tragedy is that the wood does not only come from commercial forests, but largely from natural forests. There are hardly any state regulations. Germany thus shares responsibility for deforestation in Europe's far north.

A further 880,000 hectares of forest which should be protected are being cleared for the paper industry and for heating power plants. In the last seventy years more than half of Sweden's forests have disappeared. Many of the areas have been reforested, but for the sole purpose of further timber production. State forest companies compensate forest owners by providing substitution areas. But these forests are not ecologically valuable. Their tree population is simply far too young and small to even begin to compensate for the destroyed old-growth forests.

According to the forestry authority, 37% of the nationwide wood use does not comply with nature conservation. Sweden's ecosystems are thus being transformed into monocultures. According to a UN resolution on biodiversity, at least 17% of the country's forests and the western areas of the Taiga should be protected.

The clearing of FSC-certified habitats is prohibited. By removing these habitats from the internal registers, forests worthy of protection are approved for industrial use and at the same time buyers of wood products with FSC seals are systematically duped.

In Sweden today more than 850 animal and plant species are threatened with extinction due to the destruction of their habitats. In addition, the effects of climate change are weakening the forest. The rise in temperature is particularly marked in cold regions of the earth. Less snow falls from year to year.

It seems paradoxical, but many animals, such as reindeer, suffer hunger without the snow. The cold splendour conserves grasses, mosses and lichens in winter, which the animals with their hard hooves expose and eat. If frost and thaw constantly change, a thick layer of ice forms on the plants, which the reindeers cannot reach anymore. Without additional food, they starve to death. The reindeer is now also an endangered species. In Canada this problem has already decimated some herds by up to 90%.

Moreover, thawing bacteria prove to be real climate killers. If they are released, as already happens in the Arctic regions of the northern hemisphere, they produce the highly effective climate gas methane. In the subarctic regions of Sweden, too, the soils have been thawing to ever deeper layers since the 1970s. However, this is not the only problem of the microorganisms that were trapped in permafrost soil around 100,000 years ago. The melting ice releases anthrax bacteria, which can be taken up by animals and end up in humans, as happened in Siberia for the first time in over 70 years.

In Sweden many animals drown, because the ice on the lakes can no longer support them. When crossing the lakes on their way to their winter pastures, they break through the ice. There are also people amongst the victims.

For the first time ever, there was no snow at all until mid-January in the region around Stockholm in the winter of 2019/2020. In Tyresta National Park, twenty kilometres from the city gates, no bears or lynxes can be found; instead you will find numerous other protected species such as beavers, deer, martens, birds of prey, capercaillie and Sweden's national animal, the moose. The typical Swedish glacial hilly countryside with its thin coniferous forests, moors, lakes and lichen-covered rocks were formed by huge glaciers during the last ice age. The 2000-hectare forest area is surrounded like a horseshoe by another 2700-hectare reserve and is under strict protection. But the effects of the destruction are also visible here.

It is to be hoped that the numerous German and Swedish environmental protection organisations will succeed in saving Sweden's last old-growth forests from complete deforestation, and in preserving habitats for endangered species. As part of its "Our Forest" campaign, Greenpeace is also calling on the Swedish government to put nature conservation before economic interests.

Sweden's forests are a natural heritage and important carbon stores in the fight against climate change. If the 1.5-degree target of the Paris Climate Change Agreement is to be achieved, politicians must act. There is not much time left for this in Sweden either.