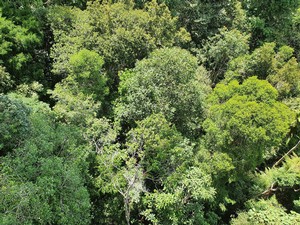 The value of forests is up to USD 150 trillion.

From this vantage point, it was probably high time to convert the world's forests into US dollars and thus make their value clear to mankind in the only way it seems to understand. With its analysis for calculating the global forest value, the Boston Consulting Group (BCG) has set itself the goal to warn the world community against further reducing this value of global forests. The experts classified the forests according to their use for the economy and their importance for the climate. Ninety per cent of all forests were assigned to the category of highest climate-regulating relevance. The most important and at the same time most threatened forests are the rainforests.

The contribution of climate change and agriculture to forest destruction will continue to be significant. Another 800 million square kilometres will fall victim to these two aspects by 2050 if nothing is done quickly, warns the Boston Consulting Group.

The disappearance of forests sets in motion a dangerous downward spiral. Oxygen production is reduced while at the same time the CO2 stored in soils and biomass is released. This process increases the speed of global warming. The increase in temperature also aggravates the risk of forest fires and offers "natural" enemies of the forests, such as the bark beetle, ideal conditions for them to carry out their destructive work on the remaining trees. The infested trees lose value for the wood processing industry, so that more use is made of healthy, protected trees. The faster this "vicious circle" spins, the harder it becomes to stop it. Literally every second counts!

the value of all the forests still existing on earth to

According to calculations by the Federal Environment Agency (UBA), the emission of a tonne of the environmental gas CO2 and its derivatives causes real costs of EUR 640. In the Fuel Emissions Trading Act, which will be redefined in 2019, the German government agreed to set the CO2 price per tonne at EUR 25 from 2021 and then to increase it gradually to EUR 55 up to a maximum of EUR 65 by 2026. What initially sounds like an enormous price increase within only five years is probably only a drop in the ocean in view of the costs calculated by the Federal Environment Agency.

Between hope and utopia

There's small consolation: According to researchers, at least in Europe, the trend towards forest destruction is slowly reversing. The areas are even growing again thanks to consistent reforestation and the use of alternative heating systems.

Experts from the Boston Consulting Group, on the other hand, warn environmentalists: "In view of the role of forests in the fight against climate change, it is imperative that we act now with all determination to stop the further destruction of forest value". Governments, NGOs, businesses and private households are all called upon to act and contribute to the restoration of forests. To this end, land use must be thoroughly reconsidered, and the reduction of global meat consumption must be taken seriously. Even commercially used forests, which cover an area of 2.7 billion hectares worldwide, would have to be placed under immediate protection in order to save the climate and meet the climate goal of a two-degree limit.

the replanting of forest areas the size of Australia